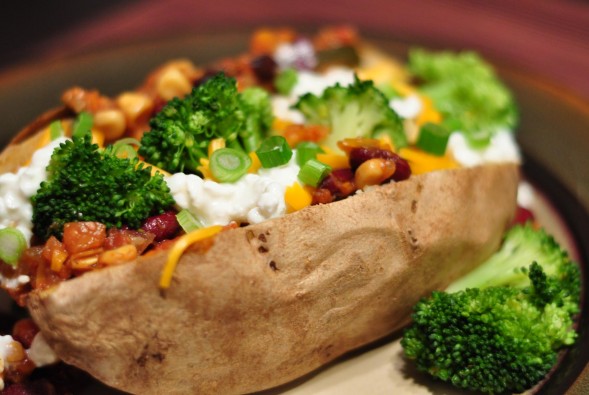 Recently Colleen was asked what we eat for our Thanksgiving meal. We have ten children, six of whom are married to meat eaters, and we have 12 grandchildren, all of whom are being raised in homes that include meat daily. We serve the following:

The first choice in our Thanksgiving buffet is a choice of starches such as baked potatoes, tortillas, and traditional choices of mashed potatoes and sweet yams. These are followed by greens and veggies that are used to top a baked potato or to go into a tortilla wrap. We also offer a lovely salad that can be eaten as is, or stuffed into a wrap. Next we feature several sides of vegetables such as green beans and candied carrots, steamed broccoli and cauliflower, and a divine asparagus dish that doesn't ever last very long. These are followed by an abundance of fresh fruit choices. The last offering in the buffet is a plate of sliced turkey. Some in the family partake of the turkey, others do not That's it! It isn't very complicated, and it is enjoyed by all.

At one time if was hard for me to endure the smells of meat when all the family got together, because of my addiction to meat. I once raised a lot of farm animals that we ate, and I was also an avid hunter and fisherman. Meat was my primary staple. However, this addiction has left my soul and now I am relatively unaffected by the smells of meat during a holiday meal, so long as the plant-based choices are the primary offering: Hearty starch choices  + Salad + Fruits + non-starchy vegetable choices.

A son in law told me a few years ago that he was pretty nervous coming to eat in our home initially, and was very grateful that we always had some meat on the buffet for him. He said that because we did this for him he tried everything else on the buffet and surprisingly liked it very much. He now loves coming to our home for dinner and chooses to eat the way we do at business and in his home. He said that before becoming a part of our family he never dreamed he would ever come to love plant-based foods the way he does now. It just wasn't a part of his upbringing, nor is it for many people.

As we teach correct principles through non-compulsory examples of goodness, it is very inviting and natural for others to discover the goodness of wholesome herbs and fruits (all plant-based foods). Except for holidays, we don't serve meat at home from day-to-day, because our younger children have eaten primarily plant-based foods all of their lives, as compared to their older siblings who developed addictions to meat when it used to be the primary entree to every meal in our home.

May all who enter your doors this Thanksgiving feel welcomed, loved, and invited without compulsion to eat more healthily!

I'd sure like the recipe to your "divine asparagus dish."

Vanessa Jacobs is now a member of Original Fast Foods
Jul 26
Welcome Them!