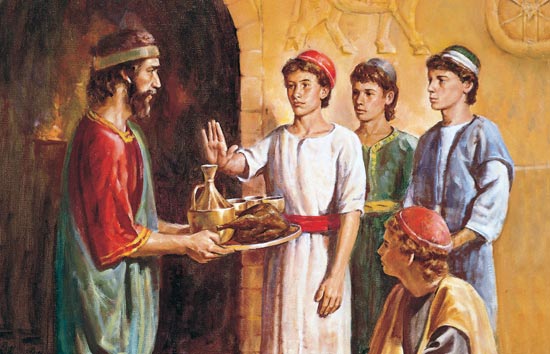 Many of us have experienced a diminishing of health and strength in our lives. Poor health can seem an insurmountable barrier that cannot be overcome. Gratefully, the binding nature of promises made to us by God offer hope as we keep his health counsels. In contrast, the Lord will not show unto those who do not obey him his strength, to one more than the other. Your mortal tabernacle is a temple for God's spirit. You are his; he created you; obey his health counsels with exactness if you desire his strength. They are as follows:

Numerous studies today demonstrate that we can live entirely free of today's food-induced degenerative diseases by following the above dietary counsels. The wholesome, edible plants of the earth, and their fruits are what man will eat during the Sabbath of the earth, or the millennium when man and animals will dwell together in peace and love. It is a diet that is adapted to the weakest of saints, or in other words, all who exercise faith to keep their covenants.

Consider now, how the prophet Daniel changed his diet to become the healthiest and wisest man in the entire kingdom of Babylon. He was taken into captivity in 605 BC at the time Babylon conquered Israel. Daniel and three of his friends (Shadrach, Meshach, and Abednego) were selected from among princes of Israel to be taught in the King's palace for a period of three years in both the learning and language of the Chaldeans. The king appointed provisions of meat and wine to nourish them during their three years of studies.

Because of covenants that he made with God, Daniel determined that he would not defile himself with the kings' meat and wine. Instead, Daniel asked his keeper if he and his three friends could eat pulse instead of meat, drink water instead of wine, and add to this seasonal fruits and vegetables. His keeper was afraid to allow Daniel to do this because if Daniel and his friends were to afterwards appear in worse condition than the other princes of Israel, then he, the keeper, would be killed.

Daniel proposed a limited 10-day test to allay his keeper's fears, where he and his friends would eat and drink as described above. After ten days, the countenances of Daniel and his friends were fairer and stronger than those who ate the king's portions of meat and wine. Daniel and his friends where afterward permitted to continue to eat in this manner throughout the remainder of their three years of university studies.

After the three years ended, the king communed with all the princes that had been selected to be educated in the ways of Chaldeans. The king found that in all matters of wisdom and understanding Daniel and his three friends were ten times better than anyone else in all the king's realm, including the king's magi. Daniel subsequently became the king's most trusted adviser, which greatly blessed the whole of Israel and other nations that were under Babylon's rule.

It is likely that Daniel would not have fulfilled the work God sent him to earth to do had his health been impaired by his diet. Rather than provide a righteous influence to Babylon's kings for 74 years, it is likely that his longevity as such would have been curtailed, or it may not have taken place at all.

We each have work to perform, and for every degree of temporal and spiritual strength we attain unto, our capacity to lift, serve, and bless others increases exponentially. If you want strength to fulfill your life's mission to do the work God would have you do, then choose to exercise faith to keep God's health counsels with exactness, as did the prophet Daniel of the Old Testament. The journey back to strong, begins with strict obedience to God. If you are willing to exercise this kind of faith, then all things will be made possible to you.

Getting Started with Daniel's Challenge

Watch the following video to better understand the nature of temporal challenges we each face today regarding the foods we eat. They are similar in nature to the challenge Daniel faced.

Click Here to Get Started with Daniel's Challenge Daily To-Do's

Commence to do the Daily To-Do's as outlined below. With each to-do click on the links to view either recipes, show-me-how videos, or further instruction: